And Then interviews: Emilie Collyer 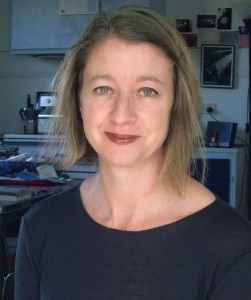 Today Emilie Collyer talks about her story “The Panther’s Paw”.

Take one anti-social, introverted, gifted animal communicator. Add one rich kid, life of the party boy. Force them together in a high stakes, deep sea chase. Set it in a solar punk future. Mix. Meet Eliza Wild and Dash Besen. It’s going to take a new kind of odd couple to save this world.

I’d read an article about this emerging genre called solar punk ( http://www.abc.net.au/environment/articles/2014/11/10/4122309.htm ) and was fascinated. I loved the idea of science fiction writing that helped us imagine a better world rather than the many versions of dystopia we have become accustomed to seeing. I was excited to set a story in such a world (not to mention the god-like rush of creating the kind of future I want to see). The challenge of course was to still provide a sense of drama, danger and adventure. If my heroes weren’t up against a faceless oligarchical corporation or totalitarian government or post-apocalyptic wasteland, what would they be up against? This challenged me to drill down to human (and other sentient being) motivators like the desire for power, knowledge and revenge. From there I started to play and soon discovered my adventurous duo.

The challenge of writing a rollicking adventure story was thrilling and scary. I write a lot of speculative fiction and plays and there is often a mystery at their heart. But to consciously create an adventure duo and write a story for them felt like a new and wonderful challenge. I also loved the idea of being included in an anthology with so many different and diverse writers, and so many writers who I hugely admire.

For me, in this story specifically, it’s all about world building. Because I’ve set the story in an imagined future I had to give enough time in the story for the reader to (hopefully!) get a full sense of the world. That would have been tricky with a limited word count. I also love the idea of continuing to write in this world and for these characters, so the longer format meant I could spend some time on character development. The duo meet at the start of the story so their relationship is very new and develops along with the reader. It appeals to me that readers get to spend long enough with these characters that they’d be curious about what might happen to them next.

Varied, exciting, energised, packed with potential. There is no shortage of talented writers, both novice and experienced, who are intrigued by short form fiction and grapple with it or come back to it time and again. Readers continue to devour short fiction in all kinds of shapes, formats and genres. Online creates more opportunities for writers and readers to meet across countries, cultures and borders which is also terrifically exciting.

My play The Good Girl is having its premiere US season off broadway in New York at 59E59 Theaters in February 2016. The play had a short season at Melbourne Fringe in 2013 where it won Best Emerging Writer Award. It’s a sci-fi play about a world in which all sex work is performed by robots and deals with questions of power, gender, consciousness and ethics. I’m thrilled to have received a Melbourne City of Literature grant so I can go over to attend rehearsals of the play and be there for the opening week. Other than that, I’m excited that my short story âIn The Slipâ will appear in coeur de lion’s Dimension6 Issue 7, and I have a novel, new play and a bunch of speculative stories on the boil.

Emilie Collyer is an award winning playwright and author. Her play The Good Girl (2013) won Best Emerging Writer Melbourne Fringe, a Green Room nomination and will have its US premiere in New York in February 2016. Dream Home (shortlisted 2013 Patrick White Award) had a critically acclaimed and sold out season at Darebin Arts Speakeasy in 2015. Her spec fic stories have twice won the Cross Genre category in the Scarlet Stiletto crime writing awards as well as a Second Prize win. Recent publications include stories in Allegory (USA) and Cosmic Vegetable (USA). Emilie has two collections of short fiction published with Clan Destine Press.