Angela Slatter: By the Weeping Gate 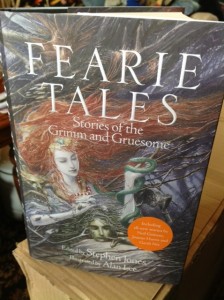 And today I, errr, interview myself about my Fearie Tales story, “By the Weeping Gate”. 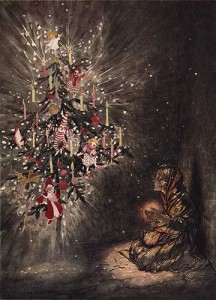 that made the biggest impression on you?
Iâve said it before and Iâll say it again: âThe Little Match Girlâ. We were staying in a friendâs house, I was about nine or so, and their daughter had a book of fairy tales I hadnât seen before ? a Hans Christian Andersen one. MumÂ  very obligingly read me three or four stories, but I was greedy. I wanted another one before lights out. I chose âThe Little Match Girlâ ? and it traumatised me. I bawled myself to sleep. The main character hadnât done anything wrong and she froze to death! No one loved her! Her only crime was to be poor!

2. Is there a natural link, do you think, between fairy tales and horror?
Absolutely. The original fairy tales are so cruel and frightening: red-hot iron shoes, kids getting turned into a log of wood and thrown on fires, sisters getting put into barrels with spikes in them and rolled down hill and over dale. I think they embed horror in our earliest childhood. I donât think thatâs a bad thing, because theyâre also ways and means of teaching life lessons … like, donât bug your mother for that last story!

3. Does your work usually play with fairy tale elements or is this a first for you?
Yes, I am an inveterate fairy-taler. I use the elements even if Iâm writing a modern horror story or urban fantasy tale ? I like being able to experiment with transferring the motifs and symbols of a fairy tale to another place and see how they interact with new environments and story elements. 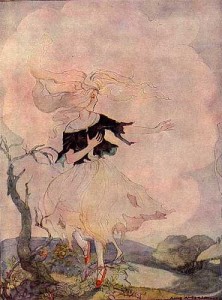 4. What do you think the fairy tale form offers to writers and readers?
For writers I think itâs an ever-replenishing well, thereâs always an image or an idea that can be transplanted to a new tale, looked at in a different way. For readers, I think itâs often a means of connecting or reconnecting with childhood ? and also with other people because so many of us have had some version of the fairy tale told to us as kids. Whether you heard European tales, African, Chinese, Japanese, whatever kind of fairy tale, they provide a link between us all and make us all part of the chain of tale-tellers.

5. What is your favourite fairy tale trope/motif/element/character with which to work?
I suppose lost girls finding ways to stand on their feet and to win out against all odds. But I donât want my girls to âwinâ because they get married – get chosen by the prince – I want them to win because they make the hard decisions without worrying about how theyâll be perceived, without worrying whether or not the prince will choose them, and then they live with their decisions and their scars willingly without being whiney little Disney Princesses.