Cate Gardner and The Bureau of Them 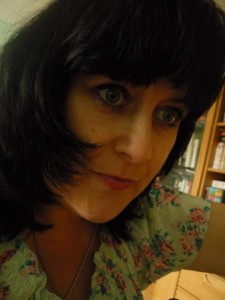 Cate Gardner is a British horror and fantastical author with over a hundred short stories published. Several of those stories appear in her collectionÂ Strange Men in Pinstripe Suits (Strange Publications 2010). She is also the author of Â five novellas: Theatre of Curious ActsÂ (Hadley Rille Books, 2011),Â Barbed Wire Hearts (Delirium Books, 2011), In the Broken Birdcage of Kathleen Fair (Alchemy Press, 2013), This Foolish & Harmful Delight (Egaeus Press, 2013) and The Bureau of Them (Spectral Press, 2015).

Her chapbooksÂ Nowhere Hall (Spectral Press 2011) and The Sour Aftertaste of Olive Lemon (Bucket ‘O’ Guts Press 2009) have now sold out, and she is currently working on a novel.

Her forthcoming novella, The Bureau of Them, is stunning and devastating and terrifying and haunting. I should know: I wrote the Introduction. I said stuff like “The Bureau of Them is Pure Horror in the best sense: it arouses fear, dread, sometimes disgust and shock … but, driven as it is by Cateâs beautiful prose and precise vision leavened with black humour, you find you donât want to turn away. You are frequently seized and held captive by dread anticipation, but you never turn away. This novella is all the more terrifying because it feels real, possible, because the landscape is populated by the sad, the angry, the pitiful, the vengeful, the impatient … the recognisable.”

Today, Miz Cate answers a few questions about The Bureau of Them in particular and writing in general.

What do new readers need to know about Cate Gardner?

Despite what you are about to read, she doesnât like to talk about herself, at least not in a serious sense.

What was the inspiration for The Bureau of Them? 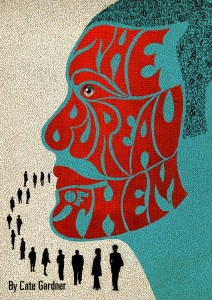 A couple of things. Thereâs an old abandoned building near the waterfront, which I used to pass by on my way home from work. Itâs coated in layers of dust and is very unspectacular. We have so many beautiful buildings in Liverpool and the fact that this ugly grey thing isnât striking actually drew me to it. People have written in the dust on the windows and that set my mind to wondering if they left messages for people inside. Which they donât of course. At least, I hope they donât. Iâm glad I donât walk that way home anymore. The other half of my inspiration was my other half. The fear of losing him.

How did you connect with Spectral Press for this novella?

Fluke. I posted something on Facebook about having finished a novella and Simon Marshall-Jones said to send it along for him to read and that was pretty much that. A bit like cheating really.

When did you first start writing and what made you want to do so?

Forever ago or in human terms about twenty-three years. As a teenager, my friends and I wrote really bad songs and I played really bad tunes on a guitar (Iâm tone deaf). Then, in my early twenties, when my friends had all disappeared into relationships, I started to write really bad poetry. Thereâs a theme here. Then, about twenty-three years ago (which I consider the start of my life as a writer) I switched from poetry to short stories. Iâm not certain what made me want to start writing, but I know that loneliness had a little to do with it. I am so full of angst.

In general, who and/or what are your writing influences?

Hitchcock, for the suspense. Lemony Snicket, for the madness. Enid Blyton and her Faraway Tree books for their tales of wonder and strangeness. Joss Whedon for the dark humour and for Spike. And, at the moment, Adam Nevill for his efforts to turn my hair white. 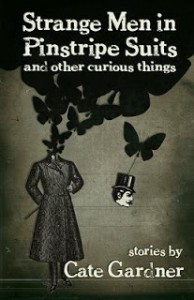 Whatâs your favourite horror story ever?

Oh, this is a toughie. Goes away and thinks about it. I want to say Westlake Soul by Rio Youers because that is my favourite book but itâs not really a horror story, I suppose. Goes away again. I will have to plump for a new one (to me) âSredni Vashtarâ by Saki, which I have only heard (told by the wonderful Tom Baker) rather than read. Itâs quietly brilliant and very ghastly.

How does The Bureau of Them differ from your previous work?

Itâs the first time (that I recall) that I have set a story in my home city, Liverpool. Parts of a previous novella where set in places I knew, but they are never officially named. Iâd also say there isnât any humour, which I often try to inject into stories. Mostly, this story differs because it is set very much in our world. Iâd also say itâs the beginning of my âgrief periodâ.

Who is your favourite villain in fiction?

Iâve mentioned him before. Spike from Buffy the Vampire Slayer. Such a fabulous character. Everybody loves Spike.

Who is your favourite heroine/hero in fiction? 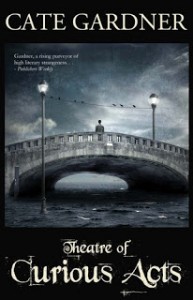 What is next for Cate Gardner?

I have a novelette forthcoming in the next issue of Black Static. Very excited about that. Like The Bureau of Them it deals with grief. Iâm also exploring the same theme (and want done with it after this next project) in a novel that Iâve just started. This is going to be a toughie to write as I will be drawing a lot on personal experience.