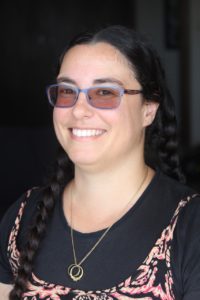 Thoraiya Dyer is an Aurealis and Ditmar award-winning, Sydney-based writer and lapsed veterinarian. Her short science fiction and fantasy has appeared in Clarkesworld, Apex, Cosmos, Analog and various Australian and US anthologies. Four of her original stories are collected in Asymmetry, available from Twelfth Planet Press. Her first novel, Crossroads of Canopy, a big fat fantasy set in a magical rainforest, is forthcoming from Tor in January 2017. She is @ThoraiyaDyer on Twitter and her website is thoraiyadyer.com.

1. First of all, what do new readers need to know aboutÂ Thoraiya Dyer?

Iâm Australian, write from a beachside Sydney suburb, have won awards for my short fiction (Iâve even shared them with the Slatter/Hannett team!) and am exhilarated to be bringing you my magical rainforest novel, Crossroads of Canopy, in less than a month. Eep!

2. What was the inspiration forÂ Crossroads of CanopyÂ specifically, and theÂ Titansâ Forest series in general?

Iâm going to answer by quoting a previous interview: Â I still have the bit of scrap paper I first wrote the idea on. It reads: âWrite an epic fantasy novel about a tropical rainforest where countries are not horizontal, but vertical, and defended by magic.â Even though I planned Titansâ Forest as a standalone initially, Crossroads of Canopy still fits that basic description. A pantheon of reincarnated gods and some mythically reimagined Australian fauna and flora made its way in there, too.

I started writing the book after a trip to Cairns and the rainforests up there in tropical Queensland. All the other rainforests Iâd been to wanted to come to the party as well â Nepalese forests, Canadian ones, Tasmanian and Singaporean and New Zealander. I put my version of the Hanging Gardens of Babylon in there because of a book on ancient civilisations that my Dad brought back from Lebanon for me.

3. This is your debut novel – what was the process like for selling it to Tor? 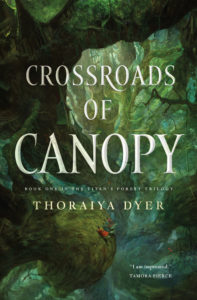 Years of fun and years of waiting. A fun year of writing, followed by a year of waiting as it leaped such hurdles as winning my agentâs approval and then actually selling to a publisher. Then two years of fun (?) edits interspersed with more waiting. I regret nothing! I am thrilled with the end result.

This week in snatched moments Iâve been switching between old faithfuls â Leckie, Pascoe and LeGuin â and some non-fiction on the Great Depression (Weevils in the Flour, Lowenstein) and native foods (Bush Tukka, Martin).

5. Is the story influenced a lot by the Australian landscape?

Yes! Several Australian ecosystems have purposefully and determinedly wangled their way into the setting. Others, not so much. There wasnât room for deserts, oceans or tundra. Maybe next series.

6. If you werenât a writer, what would you be? 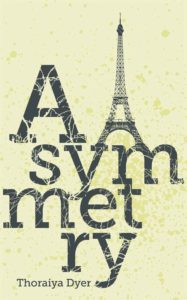 Some strange combination of the BFG and Return of the Jedi? Raymond Feistâs Magician finished in a different way to the way I wanted, and probably steered me towards fantasy. The Eye of the World certainly steered me towards Tor. I answer this question differently every time Iâm asked and canât really be sure. Childhood is so nebulous, isnât it?

You know, Iâve watched you ask other writers this and always thought that it was cruel. Iâll say Juliet Marillier, Michael Ende, Fyodor Dostoyevsky, Pat OâShea and Patricia Wrightson, mainly so they can form the tranquil acronym, MEDOW.

(Not unlike forming Voltron).

The Wheel of Time (hey, it counted as a single work for Hugo purposes), Gibranâs The Prophet, Dune, a book of Romantic poetry, and whichever survivalist guide seems applicable to the local environment. In some places you can only get water by digging up water-storing frogs, and Iâd hate to start slurping on the wrong kind.

10. Whatâs next for Thoraiya Dyer?Â 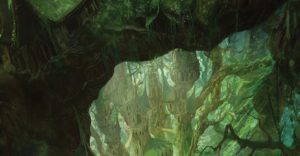 Art by Marc Simonetti for Crossroads of Canopy

Iâm trying to stop a ringtail possum from eating my passionfruit vine by putting tabasco sauce on the leaves, but it clearly enjoys a bit of spice. And thereâs a pearling exhibition coming to the Maritime Museum. Oh, you mean writing? Itâs Books #2 and #3 all the way! And launches. Many lovely launches. Please come to see me in Sydney, Newcastle, Brisbane, Canberra or Melbourne. Check my website for details, and wish me luck!