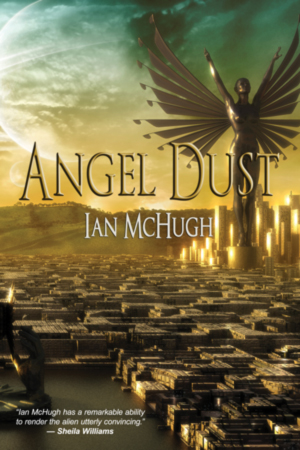 Australian spec-fic writer Ian McHugh’s debut short story collection, Angel Dust, was one of the finalists for this year’s Aurealis Awards for Best Collection – and it’s available here from Ticonderoga Publications (and you should go and get a copy). He’s sold stories to professional and semi-pro magazines, webzinesÂ and anthologies in Australia and internationally, and he’s won (well, his stories have) grand prize in the Writers of the Future contest, as well as the Aurealis for Best Fantasy Short Story in 2010. He’s also a Clarion West graduate – here he talks about writing, beer, and crass opportunism!

1. So, what do new readers need to know about Ian McHugh?

Buy me a beer and I’ll be your friend. Buy me two and I’ll follow you around to see if there’s any more. My first short story collection, Angel Dust, was published by Ticonderoga Publications in late 2014. It brings together about a third of my published stories to date. Most of the rest – and a few of those in the book that are archived at online magazines – are posted on or linked from my website, for anyone who might like to try before they buy.

2. What was the inspiration behind your new short story collection, Angel Dust?

Crass opportunism? Russell offered and I said yes. There’s four original stories in the book, but the rest are reprints, so it’s one of those books that kind of unintentionally accumulated over time until someone (Russell) came along and said, “Ooh, I reckon there’s a book in that lot, and I’m the person to publish it.” That being so, there are a few recurring themes. Angels are one that immediately leapt out to Russell – hence the cover and the title. If I was to let my inner wanker become my outer wanker for a moment I might say that “a recurring motif in my work is that of the angel, both literally and in the form of redemptive proxies that inspire my protagonists” or somesuch. A more honest answer might be that I appear to have a fetish for shiny ladies with wings.

As you’d know, when you write, bits of yourself sneak into your stories that you didn’t really intend, and you only realise what they are, and what you’ve exposed, after the story’s published and it’s far, far too late. One of the things that keeps cropping up for me is my apparently boundless anxiety about being a good man – not just a good person, but a good man, and what that means. So a number of my stories revolve around men who are failing at that. (The whole book isn’t just a repetitive meditation on neurotic masculinity, mind you. There’s fun stuff, too. Sometimes even in the same story.)

3. What attracts you to the darker side of fiction?

In my own work, I actually have to say “accident”. I really don’t feel like I have a strong understanding of what makes good dark fiction or horror. Science fiction or fantasy I can pull apart and figure out what makes them tick and replicate that reasonably reliably. Horror for some reason eludes me. Mostly I just try to put my characters through the wringer – make them suffer, threaten them, damage them. Nothing more than trying to generate tension and drama, really. If I just do that, the stories tend to go dark without me really meaning them to, and it seems to work – most years I manage to have at least one story honourably mentioned for Ellen Datlow’s year’s best. But if I try to write a horror story on purpose (eg, for Ellen, on the couple of occasions I’ve been invited to submit to her anthologies) the result is just embarrassing.

In what I read, I don’t have a particular attraction to stories that get dark. You’ll see in my answer below that my influences are all over the shop. For my taste, for a story to go dark and stay there, and still be fulfilling, that’s some really good storytelling and it’s probably the quality of the storytelling, rather than the darkness of the story, that attracts me. A friend recently leant me Nathan Ballingrud’s North American Lake Monsters, which could be subtitled “Nine Vicious Gut-punches”. Dark? Oh my. But it was the storytelling and the living, breathing, awful reality of the characters and their places in the world that kicked my arse rather than the horror elements.

4. In general, who and/or what are your writing influences?

Many, many, many. So, so many. So for the purposes of this answer I’ll just stick to fiction writers: My first speculative fiction novels were Magician, The Sword of Shannara and The Lord of the Rings, in that order. I still have my loved-to-bits copies of all of them from when I was twelve or thirteen. (The Fellowship of the Ring has the pages at either end of the Tom Bombadil bit permanently dog-eared to not read.) On top of that uniformly high fantasy foundation, my first really formative influences were Glen Cook, CJ Cherryh and Diana Wynne Jones. Cook was one of the early adopters of the kind of ‘gritty’ fantasy that people like George RR Martin and Joe Abercrombie have taken and run with. I love Cherryh’s science fiction for how she tells really intimate human stories in hard SF or space opera settings. DWJ I love for the way she revelled in taking the piss out of genre tropes.

There’s a bunch of individual books by other writers that I would point to as having really strongly affected me, too, for various reasons: Dune, Helliconia Spring, Neuromancer, American Gods, Catch-22, All Quiet on the Western Front, The Big Sleep, The Siege of Krishnapur by JG Farrell, China Mountain Zhang by Maureen McHugh, The Stone Ship by Peter Raftos, The Anubis Gates, Ender’s Game, Red Mars, Get Shorty, Fight Club, The Dispossessed, Neal Stephenson’s Quicksilver, Jose Saramago’s The Stone Ship and Death With Interruptions, Celestial Matters by Richard Garfinkle, Travel Light by Naomi Mitchison. I think Ann Leckie’s Ancillary Justice will go on that list too. It’s the first book in a long time that has so completely blown my mind.

With short stories, my focus is very narrow – it’s all about individual stories, or at most particular collections, rather than certain authors or wider bodies of work that affect how I approach short stories. Things like: “The Wonderful Ice-Cream Suit” and “The Day It Rained Forever” by Ray Bradbury, “The Glass Woman” by Kaaron Warren, “If Lions Could Speak” by Paul Park, “We Were Out of Our Minds With Joy” and “The Wedding Album” by David Marusek, everything in Ted Chiang’s The Story of Your Life and Others, “Lambing Season” by Molly Gloss, “Singing my Sister Down” by Margo Lanagan, all of North American Lake Monsters, Terry Dowling’s Wormwood and Charles Stross’s Accelerando, “A Dry Quiet War” by Tony Daniel, “Cassandra” and “The Last Tower” by CJ Cherryh, everything in Changing Planes by Ursula Le Guin, “The Lincoln Train” by Maureen McHugh, “Matilda Told Such Dreadful Lies” by Lucy Sussex, “each thing I show you is a piece of my death” by Gemma Files and Stephen Barringer, “Embracing the New” by Ben Rosenbaum. There’s more (oh, so many more) but that’s probably well and truly enough for people to be going in with. Every one of them taught me something, even if it was simply “wow”.

5. How did the whole Writers of the Future thing come about for you?

My winning story, “Bitter Dreams”, was the first one I wrote at Clarion West. Maureen McHugh (no relation, but she’s awesome) told me to send it, once I’d edited it, to F&SF with her personal recommendation, which I duly did and GVG duly replied with one of his standard “myeh, didn’t grab me” rejections. The final version of the story was over 12,000 words and WotF was about the only other professional market taking fantasy stories that long at the time, so I entered it there. I think the story really is too graphic and horrific for what they tend to prefer. I was just lucky that Tim Powers happened to be the judge who read it and, as a historical fantasy-horror, it floated his boat, whereas it might not have appealed to a lot of the other judges.

6. When did you first decide you wanted to be a writer?

I pretty much avoided it my whole life until the year I turned thirty. The risk of putting my work out there for people to see was just too terrifying. At the end of 2003, my then-wife introduced me to Matthew Farrer just before we moved to Fremantle. I can’t remember exactly what Matthew said, but he pointed me towards the KSP Writers Centre in Greenmount (across Perth from Freo) and got me onto short stories as a way out of my endless fantasy world-building procrastination.

7. What’s your favourite short story ever and why?

Either “The Wonderful Ice-Cream Suit” or “A Dry, Quiet War”, for opposite reasons.

At a prose level, virtually everything Ray Bradbury wrote is beautiful. He had a knack for delivering these soaring, elaborate word-paintings that nailed a given scene or moment, but he could do so without disrupting the, often, much more functional flow of his stories. “The Wonderful Ice-Cream Suit” is all that plus Bradbury at his most uplifting. It’s the sweetest, loveliest story I think I’ve ever read and the sort of the story that I’ll strive to emulate without ever believing that I’ll get there.

“A Dry, Quiet War” by Tony Daniel is a wrecking ball. It’s a Western where the combatants are post-human super soldiers from the war at the end of time. At the end of the story (spoiler alert) the hero is so pissed that he decides he’s going to kill the villain so hard he will never have existed. Apparently this involves the unravelling of intestines. And Daniel makes it work. Paul Park read it to us in our first week at Clarion West. I’d been planning to write a schlocky zombie-western for my first story in week two (you don’t write when Paul takes week one, you listen). Then Paul read “A Dry, Quiet War” and set the bar waaaaay higher than I’d been prepared for and I thought if I was going to write a Western I’d have to take it a lot more seriously. The result my productive panicking was “Bitter Dreams”, my WotF winner.

8. Do you envisage a time when you might give up short fiction and dedicate yourself to long form?

Not give up, no. I enjoy writing short stories too much. Long form is something I’ve been wrestling with for some time now. The past few years I’ve been battling to turn a 220,000 first draft of a novel, set in my “Bitter Dreams” world, into something more sensible. I think I know (now) what I need to do with it, but for the moment I’ve filed it under Cry For Help and moved on to saner pursuits.

9. A message to your younger, more angsty self?

Her name is Angie. Be patient, you’ll find her. 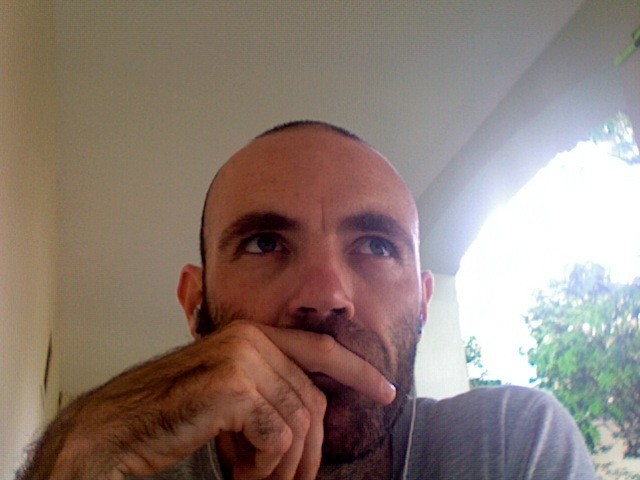 After filing the Cry For Help, I wrote a few new short stories. One of them is sold and published already. It’s called “Uncle Bob’s Crocodile”, which you can find at Urban Fantasy magazine. Another will be out soon at Beneath Ceaseless Skies, called “Demons Enough”. Hopefully the rest will find homes over the next little while. I’m currently writing another, more straightforward novel that starts from two of the stories in Angel Dust – “The Canal Barge Magician’s Number Nine Daughter”, which first appeared in the Clockwork Phoenix 4 anthology, and “The Tax Collector of Rhuin”, which is one of the new stories in the collection. Fingers crossed this novel falls out better than the last one.