In the mail: Gaslight Gothic 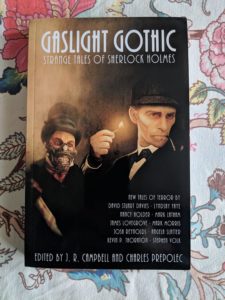 Cloaked in gothic shadows, soaked in blood, darkness descends on the world of Sherlock Holmes.

“I have heard, Mr. Holmes, that you can see deeply into the manifold wickedness of the human heart.”

Vengeance from beyond, forbidden passions and sadistic cruelty draw the great detective and his faithful companions into storms of madness and otherworldly violence which threaten to cloud the clarity of logic. Facing the eldritch reach of ancient talismans and arcane science, from the streets of London and Paris to the loneliest of manor houses, the great detective battles the weird and uncanny. Can steadfast reason hold against unspeakable terror when Sherlock Holmes can no longer eliminate the impossible? Follow the great detective through ten new tales of terror as he doggedly pursues investigations leading him to the edge of reason and beyond!