Midnight and Moonshine – the release! 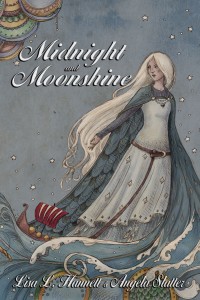 And thus we threatened and thus it came to pass … or rather will do so in November this year. Yes, we have a cover for Midnight and Moonshine, we have stories, we have an Introduction by Kim Wilkins, a release date, an accommodating publisher, and we have details.

Pre-ordering can occur here – either the trade paperback or the fancy-schmancy hard cover limited editon with our paw prints on it.

What is Midnight and Moonshine about? We’re so pleased you asked:

Are Lisa and Angela available for interview? Yes, contact them either via their websites or via Russell B. Farr at Ticonderoga Publications (editor@ticonderogapublications.com).

Who did that awesome cover? The magnawesome Kathleen Jennings.

9 Responses to Midnight and Moonshine – the release!