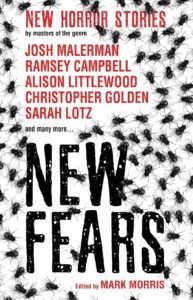 Includes a Sourdough world tale from me, called “No Good Deed”.

Since the recent announcement of the closure of Great Jones Street, Iâve seen it bandied about on social mayhem sites that the short story as a viable form for speculative fiction is in its death throes. Well, Iâm here to tell you that it just isnât true. 2017 saw some of the best collections and anthologies of this generation produced by some of the greatest authors and editors in the business; some young, some grizzled veterans, all hugely talented and working at the top of their game, particularly in horror fiction. One such editor is Mark Morris, curator of the stories in this book Iâm talking about today.

New Fears is an anthology that hearkens back to the old days, taking something that was the norm back in the â70s and â80s and making it seem almost new by comparison to the typical themed volumes that are being produced en masse today. This book, in the vein of such greats as Douglas E. Winterâs Prime Evil and Dennis Etchisonâs Cutting Edgeânot to mention everything Kirby McCauley ever touchedâis un-themed because Morris wanted to create something that would demonstrate the varied and seemingly limitless possibilities of our chosen genre. So, he limited his contributors to just one simple and very important requirement: write a damn good story. And I can tell you that the authors within responded in fucking spades.