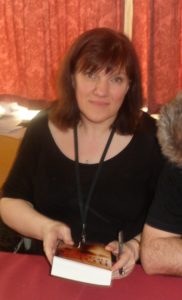 Marie OâRegan is a British Fantasy Award-nominated author and editor, based in Derbyshire. Her first collection, Mirror Mere, was published in 2006 by Rainfall Books; her second, In Times of Want, came out in September 2016 from Hersham Horror Books, and her short fiction has appeared in a number of genre magazines and anthologies in the UK, US, Canada, Italy and Germany, including Best British Horror 2014 and Great British Horror: Dark Satanic Mills (2017). Her novella, Bury Them Deep, was published by Hersham Horror Books in September 2017. She was shortlisted for the British Fantasy Society Award for Best Short Story in 2006, and Best Anthology in 2010 (Hellbound Hearts) and 2012 (Mammoth Book of Ghost Stories by Women). Her genre journalism has appeared in magazines like The Dark Side, Rue Morgue and Fortean Times, and her interview book with prominent figures from the horror genre, Voices in the Dark, was released in 2011. An essay on âThe Changelingâ was published in PS Publishingâs Cinema Macabre, edited by Mark Morris. She is co-editor of the bestselling Hellbound Hearts, Mammoth Book of Body Horror and A CarnivÃ le of Horror â Dark Tales from the Fairground, plus editor of bestselling The Mammoth Book of Ghost Stories by Women and is Co-Chair of the UK Chapter of the Horror Writersâ Association. Marie is represented by Jamie Cowen of The Ampersand Agency.

1. What do new readers need to know about Marie OâRegan?

Iâve been writing for quite some time now; I started quite late, when my kids were small, and it was a while before I plucked up the courage to submit anything. My first published short story was âSuicide Bridgeâ in 2001, and since then Iâve had two collections out (Mirror Mere and In Times of Want), a few novellas; and have had short stories in many magazines and anthologies â I was nominated for the British Fantasy Award for Best Short Story for one of them, âCan You See Me?â. Iâve also edited a number of anthologies with my husband, Paul Kane: Hellbound Hearts, which was an anthology of stories inspired by Clive Barkerâs âHellbound Heartâ, Clive even did the cover art for us, the first new Cenobite in years, Vestimenti; The Mammoth Book of Body Horror, CarnivÃ le: Dark Tales from the Fairground, and my first solo anthology project, The Mammoth Book of Ghost Stories by Women. Hellbound Hearts and The Mammoth Book of Ghost Stories by Women were nominated for the British Fantasy Award for Best Anthology. I was a member of the British Fantasy Society Committee for eight years, during which at various times I was editor for their newsletter, Prism, and their fiction magazine, Dark Horizons. For the last four years, I was Chair (2004-2008), and together with Paul have organized a number of FantasyCons. Weâve also been part of a World Horror Convention team (2010, Brighton) and World Fantasy Convention team (2013, Brighton), both organized by Stephen Jones, Michael Marshall Smith and Amanda Foubister. Currently, together with Paul, Iâm co-Chair of the UK Chapter of the Horror Writersâ Association.

2. Whatâs your favourite branch of horror? 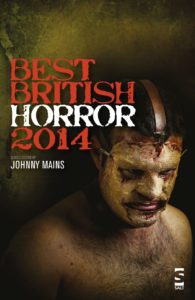 3. What was the inspiration for The Mammoth Book of Ghost Stories by Women?

I got sick of seeing posts on Social Media saying women donât write horror, women donât submit their horror stories/books to publishers or editors, itâs a male dominated genre etc. Whilst itâs true there are a lot of male authors, there are a lot of women writing horror, including ghost stories. Weâve always been around, we will always be around, and I wanted to show that. I chose to include some classic ghost stories from women such as Edith Whartonâs âAfterwardâ, Mary Elizabeth Braddonâs âThe Lost Ghostâ, which is heartbreakingly sad, as well as some current female authors â not all of whom are well known, but are excellent. Hopefully I succeeded â although at a recent convention, a young girl was surprised to see the title, saying âwomen donât normally write ghost stories, do they.â Head desk moment, definitely.

I love Stephen King; have done since I read Carrie at the age of thirteen. I also love Clive Barker, again, since I first read The Books of Blood. Before I started reading horror at the age of nine, it was Agatha Christie. Â In a slightly different genre, I love the work of mystery novelist John Connolly. His Charlie Parker detective series is amazing, and he also writes wonderful supernatural short stories. 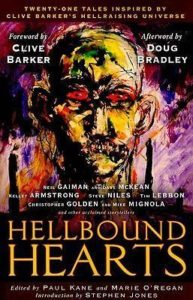 5. You can take five films to a desert island ? what do you choose?

Only five? But there are so many to choose fromâ¦ Ah, okay. Let me think. I think I would have to take The Green Mile; itâs a brilliant adaptation of the Stephen King story, and gets me every single time I watch it. Then I would have to take The Shawshank Redemption, for the same reason. Iâm a big fan of Christopher Nolanâs films, and donât really like picking a favourite â but if I have to then I guess it would be Inception; love that film and have watched it so many times. Scream is another favourite, and for my last one I think Iâd choose something very different: While You Were Sleeping. Not in the same vein as the others, but sometimes you need to watch a weepie and thatâs a great one, plus Sandra Bullock is in it.

6. Can you remember the first story you read that made you think âI want to be a writerâ? 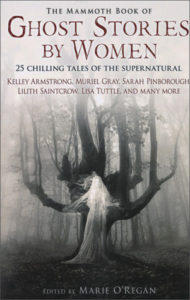 Not specifically, no; I read everything I could get my hands on voraciously from being a very small child â from kiddie books to Enid Blyton, to Agatha Christie at about six or seven, horror at nine, taking in pretty much every genre on my way through the local libraryâs stock in my teensâ¦at some point, I realised I could make up my own. Before I started to write, though, I drew. I could always be found either reading or drawing.

7. What is your favourite horror film?

Again, there are so many, and occasionally it changesâ¦ but Iâd have to say The Exorcist, even though itâs the only one thatâs ever given me bad dreams. That could even be why itâs my favourite, I suppose.

Vampires. A ghost is haunting a place or a person for a reason; something needs to be resolved and theyâre rarely deliberately physically harmful. A vampire is just this creature of mindless hunger â its sole purpose is to drain you. 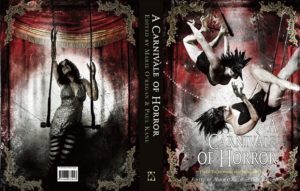 10. Whatâs next for Marie OâRegan?

I have a collection, The Last Ghost and Other Stories, coming out from Luna Press in 2019 as part of their new âHarvesterâ series. Iâm editing an anthology of ghost stories for Titan UK/US called Phantoms, that will be released in October of this year â featuring stories from the likes of Joe Hill, John Connolly, Kelley Armstrong, Helen Grant, Tim Lebbon, and a great story from your goodself, to name but a few. Iâm working on another anthology with Paul that I canât really talk about yet but Iâm very excited about; I have four short stories due out this year (oneâs a reprint for a charity anthology) so far; I have a supernatural novel on submission via my agent, Jamie Cowen of Ampersand Agency. Iâm also working on a novella, âResurrection Bluesâ, to go with a novella written by Paul; theyâll be published in one volume by Black Shuck Books. Then there are a couple of short stories to write, a comic script, a screenplay, after which I can get on with the next novel, hopefully. There are always a few things on the go, at varying stages of completion. And weâre working on some more events for the UK Chapter of the Horror Writers Association, too. First up is our HWA Presents Highlighting Horror: Horror, Thrillers and Chillers in March, a one day event discussing crossover fiction, with authors such as David Mark, Paul Finch, A.K. Benedict, Steph Broadribb, SJI Holliday. Lots to keep me busy.