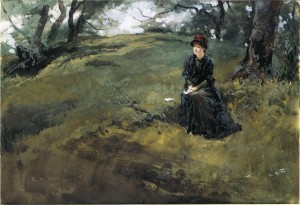 So, my first new words after the break are on a short horror story called “The October Widow”.

The October Widow knew herself hunted, though sheâd caught no trace of whoever pursued her.

She was careful when she left the house, keeping a weather eye on the rear-view mirror, but able to discern no particular vehicle from those sharing space with her on the road. At night, she made sure to close the curtains well before darkness fell, when lights might pick her out as a target against the evening gloom. Yet no one appeared on the footpath or stoop, there were no raps at the door, no envelopes in the mailbox. She watched the calendar tick over with inexorable certainty and, as the day paced closer, the grid of nerves inside her chest tightened like wires pulled by circus strongmen.

This entry was posted in News, On Writing: General, On Writing: Short Stories and tagged short stories, The October Widow, writing. Bookmark the permalink.