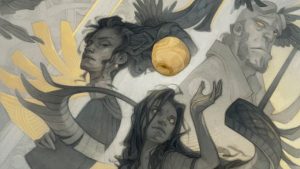 I have been sitting on this news for literal years! Mike and I talked about it at the end of 2019, we were set to start work … and then BAM! The Plague Years.

But it’s all good – we’re up and running now, and Castle Full of Blackbirds is due for release in September 2022. It stars Sara May Blackburn and Miss Brook from The Return of Effie Kolb (with some guest appearances from the Big Red Guy) and I’m super proud of this little baby, which was a delight to work on … something new and entirely different for me.

Thanks so much to Mike for asking me, and then being patient with all those questions that started with “So, this demon back in issue #thing of 19whatsit5 …”, and a huge thanks to the Dark Horse Team (Katii O’Brien, Jenny Blenk and Misha Gehr) for their sharp editorial eyes, also answering all my questions and humouring me (“There must be a green leaf on that apple!!”).

Here’s the full article over at Daily Dead.