Sublime juxtaposition and gravitas: in the Lair with Jason Nahrung 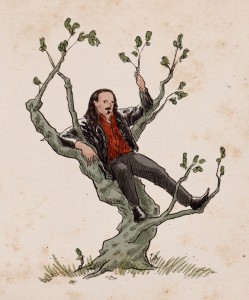 Today we kidnapped the delightful Mr Jason Nahrung (yes, the man who competes with Sean Williams and Trent Jamieson for the title âNicest Man in Australian Spec-Ficâ). Jason is the author of the novel The Darkness Within and the new novella Salvage (which is by turns disturbing, frightening, affecting, and always elegant), as well as some very fine short fiction.

Alas, the vortex manipulator experienced some technical difficulties (okay, we might have been drinking), and landed Jason in a tree. He took it all in good humour (although characters looking and sounding rather like us might die horribly in his next novel), and kindly answered questions about committing Gothic badness, vampires as serial killers, what the loss of religious significance means for vampire lore, and why a vampire should be a bona fide cape-wearing agent aimed at upsetting the status quo.

As always, our very fine art comes from the very fine Kathleen Jennings.

Dr Lisa: Youâve described your new novella, Salvage, as âseaside Gothicâ and your website is called âVampires in a Sunburnt Countryâ â both of which suggest that the Australian landscape is a crucial element in your writing. What is it about our fair country that inspires the darkness in your stories?

Jason: There are two elements there â the landscape and the darkness. I grew up in the bush, so it doesnât scare me so much â itâs the cities that frighten the bejeezus out of me. A large part of my taking the step from writing stories to seeking to get them published was the desire to see the kinds of stories I loved set in my own country, with my own cultural background. I love the landscape here with all its variation, and I have a healthy respect for the dangers that distance and isolation can bring. Distance and isolation are natural partners for the Gothic, and Gothic is one of my favourite genres. Adapting Gothic to the sunny Australian landscape is half the fun â that sublime juxtaposition can be quite effective.

Dr Angela: Which recent works do you think have actually done a good job of turning vampires back into what they should be, i.e. scary motherfuckers? I found Croninâs vampires in The Passage pretty damned creepy, with that sense of something utterly implacable and beyond control.

Jason: I couldnât get into The Passage â maybe I should try again. I agree that vampires should be Other, not superheroes; I want mine Gothic to the nines. One of the best portrayals Iâve come across lately is that by Kim Harrison, although I guess thatâs not that recent â Ivy is such a lethal, conflicted package. And the American Vampire graphic novel, guest-written by Stephen King; that had a suitably scary bunch of vampires doing some Gothic badness. Lindqvistâs Let the Right One In was a beautiful portrayal. The problem with some of the more violent âmonsterâ vampires is that they often lose their metaphoric qualities â they swarm like zombies, they might as well be zombies (and even zombies are being humanised now). I think they began to lose some of their threat power once the religious equation was lost; without the threat to soul â without the alienness of being Undead — they became just another serial killer. And now some kind of ultimate plastic surgery offered by a BFF for which the price of admission is nowhere near high enough.

Dr Lisa: Vampires: passÃ© or perpetually appealing? Have the sparkly ones ruined it for the rest of them?

Jason: The thing about the vampire as a metaphor is that it is constantly reinventing itself. Admittedly, itâs had a rough time of it lately â objectified as a sexual object without all of its Undead overtones and gravitas â but the fact is, itâs hanging in there (even if it upside down). There seem to be plenty of books, TV shows and movies still in the works, so Iâd say itâs a matter of waiting to see where the vampire ends up next â my hope is for somewhere once again monstrous.

Jason: Bram Stokerâs Dracula, as in the book character, not the Coppola film of that title, though it was a romp (yay Gary Oldman!), is the one that seduced me to the dark side. Heâs the archetype for me; on screen, sinister and elegantly portrayed by Bela Lugosi and nobly captured by Christopher Lee, who had to labour under some unkind scripting. I also love the spooky otherness of Max Schreckâs Count Orlock in Nosferatu, so beautifully recreated by both Klaus Kinski and Willem Dafoe. Catherine Deneuve presents a perfectly cool, lonely representation in The Hunger. And thereâs Le Fanuâs Carmilla and a lovely Hammer adaptation, The Vampire Lovers â I love how Hammer reversed the threat to make their anti-hero an utterly sympathetic one.

Dr Lisa: What do you look for in a great vampire tale? Any favourites?

Jason: I like a vampire to have a real sense of Other. To be menacing. To be an agent aimed at upsetting the status quo. I want capes, damnit, but I realise Iâm probably well out of luck on that score â Iâve toyed with lightweight Drizabones as a substitute and been happy with the result. Dracula, both novel and 1931 film, and Nosferatu are obvious examples of a vampire at the height of its Gothic goodness (with and without capes!). I want the vampire to mean something â I want it to be a vampire because it can only be a vampire for the purposes of that narrative.

Dr Angela: Finish this sentence: the vampire should be …

Jason: I almost always listen to music when Iâm writing. Often itâs just the iPod on shuffle, keeping the world at bay, but when Iâm reaching for a mood, or trying to find a way into a story, or perhaps resolve an issue, I turn to the stereo and hit albums that can transport me to where I need to be. Joy Division and the Sisters of Mercy are two of my most trusted, Rammstein gets the morning pulse rate up, but it depends on the atmosphere Iâm chasing: Concrete Blonde to Depeche Mode and Iron Maiden, Sarah McLachlan to Gary Numan and Jarreâs Oxygene â¦

Dr Angela: Iâve been reading Montague Summers lately on the vampire and the werewolf and he frequently makes links between the two creatures, e.g. a man whoâs been a werewolf in life will become a vampire in death â keep in mind he also says things like âNo right thinking person can doubt that witches turn themselves into catsâ (I paraphrase) â what do you think is the relationship between the two creatures? Which one is scarier?

Jason: There are definite similarities. Both have physical transformation, nocturnal preferences and little regard for societyâs behavioural norms, particularly in regards to sex. Both invade and propagate through infection. I think the vampire is scarier, though, due to that eternal life thing â the secrets they carry, the unending hunger, the permanence of being Other. Whereas the werewolf can trot around quite normally for most of the month, day or night; its passionate outbursts are containable; the vampireâs are insatiable. Lycanthropy is more clearly a curse or disease and hence treatable; vampirism is a truly supernatural existence â that Undead sucker ainât even meant to be moving!

Dr Lisa: If you could host a ghostly dinner party and invite five deceased authors as your guests, who would you resurrect for the evening?

Jason: You know what would be neat? To take the revenants for dinner on that dining tram that goes around Melbourne, so we could eat fab food and also give them a bo-peep at the city and see what they thought. So who to trundle around town with: Bram Stoker, because the Irish are always good fun, and I owe the guy a drink for being such an influence on my own proclivities; Mary Shelley, because sheâd have some awesome dinner party tales of her own; Edgar Allen Poe, to see if he could help me finally work out how to tell the difference between a raven and a crow; John Kennedy Toole, just so I could show him that itâs never that hopeless; and Iâm gonna cheat for the fifth seat and offer it up to Ian Curtis, not an author but a fine lyricist, just so I can ask him why the fuck he did it.

Dr Angela: What kind of a future do vampires have in Australia? I mean, we have a lot of sun.

Jason: Australia is highly urbanised, so things are good on the food and hiding-in-plain-sight front. With modern technology, staying indoors during the day isnât a big deal, on both service delivery and entertainment fronts. Pull up a coffin and dig another bag of O-neg out of the Esky would be my advice.

Â Salvage can be pre-ordered from Twelfth Planet Press.

Jason’s first book, The Darkness Within (Orbit), is carried by all bookshops of discerning taste.

Jason can be found blogging here.

This entry was posted in Lair of the Evil Drs Brain, News, On Publishing, On Writing: General, On Writing: Short Stories, On Writing: The Novel, Pimping/Promoting! and tagged jason nahrung, lair of the evil drs brain, orbit, salvage, the darkness within, twelfth planet press. Bookmark the permalink.

6 Responses to Sublime juxtaposition and gravitas: in the Lair with Jason Nahrung