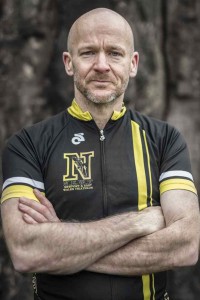 Tim Lebbon is a New York Times-bestselling writer from South Wales. Heâs had over thirty novels published to date, as well as hundreds of novellas and short stories. His latest novel is the thriller The Hunt, and other recent releases include The Silence and Alien: Out of the Shadows. He has won four British Fantasy Awards, a Bram Stoker Award, and a Scribe Award, and has been a finalist for World Fantasy, International Horror Guild and Shirley Jackson Awards. Future books include The Rage War (an Alien/Predator trilogy), and the Relics trilogy from Titan.

The movie of his story Pay the Ghost, starring Nicolas Cage, is due for release this September, and other projects in development include Playtime (an original script with Stephen Volk), My Haunted House with Gravy Media, The Hunt, Exorcising Angels Ste (based on a novella with Simon Clark), and a TV Series proposal of The Silence.

What inspired your story âFlotsamâ?
I read an article recently about a woman who had become fascinated with messages in bottles. She combed beaches for them, and just occasionally she’d find a message. A lot of the time they were from children living just along the coast, writing messages and launching them in an attempt to see how far their bottles might travel. Other times, the paper she took out of bottles was so old that any writing had long since faded away. I found this interesting, and a little haunting. I knew it would find its way into a story one day.

Whatâs the first horror story you can remember making a big impact on you?
I’m sure I read horror fiction when I was very young, but it was The Rats by James Herbert that sticks in my mind. I read that when I was 10 or 11, a very adult read, but it opened up my reading horizons. Before then I was reading Willard Price, Hardy Boys, etc. After The Rats, it was James Herbert and Stephen King.

Name your three favourite horror writers.
That’s a hard one. Stephen King. Adam Nevill. Arthur Machen. But this might change month by month.

Is your writing generally firmly in the horror arena or do you do occasional jaunts into other areas of speculative fiction?
I write all sorts. My new novel The Hunt is a thriller. I’ve written fantasy (very very very dark fantasy). But there’s always a dark tinge to what I do.

In all honesty, I probably have over 1000 books unread. But books I intend reading soon include Three Moments of an Explosion (China Mieville), Tin Men (Christopher Golden), Those We Left Behind (Stuart Neville), and H is for Hawk (Helen Macdonald).