The Behind the Plastic Sheet Drive-by: Robert Shearman

I’ve driven-byÂ  Mr Shearman before and he survived. Obviously it wasn’t too terrible, because he lined up again when I nagged, errr, asked nicely. What can I say, other than he is one of my favourite people and one of my favourite writers. His stories seem deceptively simple when you start … but by the third paragraph you’re hooked, rather like a fly that’s flown into a web that turns out to be made of fascinating chewing gum. You find you can’t put the book down, you’re driven to finish it – and then you’re tremendously bereft when it’s done and you want him to get on with the business of writing another book for you. Well, go on, Shearman, get on with it! Oh, wait … here’s one he’s prepared earlier,Â Everyone’s Just So So Special.

If you’d like a taste of his wondrous fiction, go here and have a read of the very mad and very awesome One Hundred Stories project – the tales of people history forgot.

His story in A Book of Horrors is the disturbingly named “Alice Through the Plastic Sheet”.

1. AliceÂ  Through the Plastic Sheet is a creepy title. What inspired this story?
The most creepy thing of all – noisy neighbours! Gah, it’s a sign of age. I’ve become so intolerant of other people making noise – playing music, talking loudly, having fun. Quite seriously, sometimes I turn all the sound down in my house to get everything as silent as possible, just so I can detect anything from next door – and if I can, I know I can bask in justifiable anger. So Alice began life as a comedy – this idea of new neighbours moving in, who were selfish with their noise, but each and every time you go next door to do a bit of passive aggressive complaining, you look through the window and see they’re just silent frozen waxwork dummies. And somehow as I worked on it, and it grew, and took new shapes, it became something rather more disturbing. My wife thinks it’s probably the most disturbing thing I’ve ever written. She said reading it was like being confronted by my own madness. And ever since then she’s refused to talk to me. Bugger.

2. Your version of horror isÂ very, very subtle (George Clooney’s Moustache andÂ Damned if You Don’t spring to mind – hiding under the bed and wearing clown masks). What do you think is the secret to an effective horror story?
I think it has to be surprise, doesn’t it? It’s the surprise of slight dissonance, of things not quite adding up or making sense. The idea that if you just looked off out of the corner of your eye you’d see something that you always ignore and would turn your idea of what’s real and stable and safe upside down. I get a bit tired personally of familiar horror tropes, like ghosts in old houses, or vampires in Transylvania. Much more scary to have a ghost in a house that is being built before anyone could even have died there, or a vampire in a sushi bar in East London. Actually, forget vampires. I don’t like vampires. Fangs, but no thanks.

3. The first thing you read or watch that scared the pants off you?
It’s a clichÃ©, but I suppose it had to be Doctor Who. I couldn’t watch Doctor Who at all when I was a kid. I never made it through the opening credits, with that terrifying music, and that time tunnel that looked like something milky and evil, and Tom Baker’s face – that was the most frightening thing of all. I’m a huge fan now, of course, and to work on the show required me to be as much of a list-reciting addict as everybody else, but I couldn’t sit through a whole episode until Tom Baker left when I was eleven. I avoided anything horrific until I was in my twenties – no, really – because it’d give me nightmares. When I was at school, a boy in class lent me a video of Omen II, and I fast forwarded through all the deaths so I wouldn’t see the goreÂ – and that was a huge mistake, because they were worse in my imagination. Even now I’ll go a long way to avoid a gory movie. I don’t like it. Ick.

4. Your horror writer of choice?
The most frightening writer I’ve ever read is a Japanese manga writer called Junji Ito. His three volume novel Uzumaki is quite simply the most bizarre thing in the world, all about a town that gets obsessed with spiral shapes. Oh, it sounds like rubbish. I know. But it really isn’t. It does strange things to the way you look at the world, and that’s what I think horror should do. Stephen King is, of course, every year an absolute must read. And mostly for the opposite reason, because his great skill is in making you feel warm and comfortable, and liking his characters, and dreading that the most appalling things will happen to them.

5. Donuts or danishes?
I rather think I’ve gravitated these days towards the danish. Which I feel slightly appalled by, because the doughnut, I know, is what my heart yearns for, and the foodstuff I shall die eating. At the moment I yearn for anything sugary, though, because I’m on a diet, and each night sleep nibbling a cucumber and weeping.

His site is here and you can find information about his new and quite frankly awesome book, Everyone’s Just So So Special: The history of the world. All of it. Its wars, its empires. Each and every one of its decline-and-falls. It’s really terribly simple. It’s the story of a bunch of mediocrities who are trying to look special. And it is my duty, it is my pleasure, to expose the lot of them. 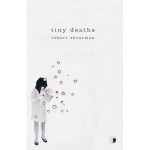 This entry was posted in Drive-by Interviews, News, On Publishing, On Writing: General, On Writing: Short Stories, On Writing: The Novel and tagged A Book of Horrors, big finish, everyone's just so special, Junji Ito, lovesong for the shy and cynical, robert shearman, stephen jones, stephen king, tiny deaths, Uzumaki. Bookmark the permalink.