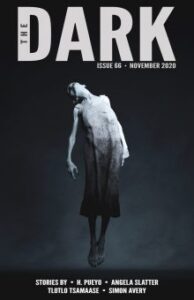 I’ve got a reprint story up at The Dark in Issue 66!

There were stories about Wicker Bridge Estate, always had been even before there was an estate. So many stories and for so long that it was hard to tell if what you were being told was new or old. Something that smacked of urban legend might well have its roots in ancient tales of demons and spectres. Sometimes the true tales were worse: folk dying alone, left undiscovered for years, or eaten by beloved pets, only found when some number cruncher realised a gas bill hadnât been paid for far too long.

Tricia had heard them all, retold a few in her time, but the one that occurred most often amongst the children she dealt with was this: if you were suffering, if you were alone and friendless, if you were desperate, a pale lady would appear and offer you a deal.

And there are also excellent stories by: