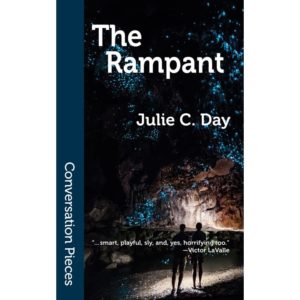 1. What do new readers need to know about Julie C. Day?

*Need* to know? Probably not a whole hell of a lot. Meeting me in person doesn’t naturally translate into expectations met when you read my fiction! Actually, it definitely doesn’t. I tend to smile and have been told by those who only know me in my everyday life that I have a warm and sunny disposition. Ha! My fiction is surreal, dark, unexpected in how it unfolds, and often utilizes scientific facts as metaphor. Which is–in my estimation–the ingredients for a whole helluvaÂ lot of fun. I think what people mistake for a positive nature is actually an understanding that everyone has a tough time of it and that not ‘being in the shit’ makes it a good day. Note: You can’t see it through this computer screen, but I’m grinning right now. My sense of humor is…absurd.

On a more pragmatic note my first collection, UncommonÂ Miracles, came out 2Â years ago. My first novella, The Rampant, came out last year and is currently a 2020 Lambda Literary award finalist. I’m always writing and always failing to finish and have at least two dozen projects slowly cooking on the hob. Right now–aside from Pandemic Living–a great name for a magazine, btw–I’m Editor-in-Chief of the charity anthology theÂ Weird Dream Society. It comes out later this month with a slew of amazing short fiction writers all pitching in to create what I’m going to describe as a humdinger of a Table of Contents. You can pre-order it now. Yeah, I went there. All proceeds are going to RAICES, a nonprofit legal organizationÂ that’s working to help immigrants and asylum seekers at the U.S. southern border, a population of people who desperately need our help now, during this pandemic.

2. What was the inspiration for The Rampant?

The Rampant, like all my fiction, is a stew pot of ingredients. Emotionally, one of the biggest touchstones was my time as a child in Southern Indiana–the above-ground earthly location for the first act of the story. And then there’s the bits about caterpillars and how to raise them in underground skin fields along with bioluminescent microbes and mushrooms. I got to investigate and play with so many bits of the natural world when I created the various lands of the dead. And then there are my feelings about love and gender roles, along with my thoughts on religion and the self-awareness of nonhuman creatures.

It’s both a coming of age story and a quest story set in 3 different locations: Indiana, the underworld Plains (basically a brutal form of purgatory), and the Netherworld. As a short fiction writer, I wanted a story that guided me to stay within my lane. I have too many longer projects that I’veÂ been unable to corral. Basically, I am too easily distracted by new ideas thatÂ lead to one complication after another…

My influences are all over the map. We all read books for more than one reason. For me, comfort books are just as important as those that shake my brain. Jane Eyre was my 13-year-old obsession, though I hated Wuthering Heights. Brave New World was fascinating at twelve. Ray Bradbury lingered from ten through fifteen years of age. I read all of Isaac Asimov as a tween, including his incredibly self-indulgent multi-volume autobiography. I read the entire teen biography section of our library, as well as the HarlequinÂ Romances my best friend and I found squirreled away in her basement, and then there was the erotica found tossed aside in the woods. Tanith Lee, mainly her science fiction and vampire fiction, caught my interest and Harlan Ellison’s short fiction hit me so hard, I’ve been afraid to return to it in case I ended up in a rage over unnoticed misogyny. Russell Hobern’s Riddley Walker, blew. my. mind. I’m not sure I loved it as much as couldn’t put it down. Unfettered writerly wildness-the use of language, the dialect. In my early twenties I discovered Ford Maddox Ford’s The Good Soldier and reveledÂ in the structure of that novel and the way each of the four sections of the novel seemed to tell the whole story, and yet didn’t. I’ve reread it often. And then there was Jean Rhys’s Wide Sargasso Sea, a retelling of Jane Eyre from the ‘mad’ wife’s perspective.Â Mrs. Dalloway made me throw her across the room, but I found my way eventually and stretched a bit more. And, of course, the list goes on:Â AnaÃ¯sÂ Nin, Douglas Adams, Kizuo Ishiguro, Anne McCaffrey, Harry Harrison, and so many others.

If you can’t already tell, IÂ was not a discerning reader and I didn’t stick with any particular canon. But I read a lot starting at about the age of eight, and something about that magpie approach to fiction formed who I am today. It continues to do so. Because I continue to be influenced by every damn writer I read. That list of authors I admire and take into my heart is a living, breathing list. It is ever evolving.

4. When did you first realise you were going to be a writer? 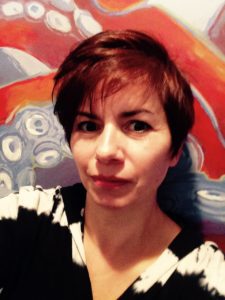 It’s more a matter of when I finally allowed myself to be a writer. When I was a kid I wanted to be an astronaut, a marine biologist, and a writer. Something about my creative endeavors seemed illegitimate. I was good at science. I loved academic classes. Being creative just didn’t fit with the person I was supposed to be. It didn’t help that my approach to writing is not a generally seen as standard. A moment or a feeling come first, worldbuilding follows, along with attempts to figure out the characters. Eventually, at the very end, plot arrives. It looks messy to anyone watching my progress from the outside. It was easy to judge myself as a daydreamer without any particular ability or ability to get better. I wrote for years without finishing anything except some poetry and a few short stories. And then around the age of 31 I decided I really could do more. I went to my first workshop, the Banff Writers’ Conference and I negotiated reducing my dayjob schedule to 4 days a week. Then came children–a long and difficult pause or perhaps a slide–and eventually an inability to not write anymore.

I still have trouble with the idea that I am a legitimate writer rather than a writer aspiring toward professional status. I honestly don’t know if that will ever not be with me.

Well, I have two starts to longer works that kept nudging me from the corner. One is Mesotherms a story about humans with gorgon attributes, climate chaos, desperation, snake-based class divides, and the ways in which humanity can change–beyond snakes. Another is a novella that is about 2/3 done. Every Thought a Sin which again addresses climate chaos, but this time with human modification via microbe infused murals. I have a few short stories waiting for my attention, as well. “No Whole Bodies Are Left Behind” is the one closest to completion. I’m hoping my Pandemic Induced Creative Lethargy shift soon. I keep trying, which is all any of us can do.

Oh, and I have a new story in the anthology The Way of the Laser: Future Crime Stories. The book is available for pre-order. While I often write science fictional stories, in my own strange Julie way (Every Thought a Sin is one such story), I’ve realized most of my publications are closer to fantasy. This one is not. And I sort of adore what I did with it. There is nothing I enjoy as a writer more than twisting those writerly rules and trying new things. It’s what my creative brain craves. I hope you get to read it, actually. I’d love to hear your thoughts <3

You can find out more about Julie C. Day here.