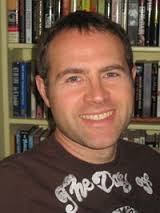 The delightful and rather legendary Mr Mark Morris is the editor for the first volume of The Spectral Book of Horror Stories from Spectral Press (brainchild of the equally delightful Mr Simon Marshall-Jones). Mark was kind enough to answer some questions for me about the upcoming anthology in particular and about horror in general.

1. What inspired you to take on this anthology?

My first introduction to adult horror fiction was short stories. I read literally hundreds of horror stories before I read a single horror novel. At the age of nine or ten I started reading the annual Pan and Fontana horror and ghost story anthologies, plus the Armada ghost, SF and monster story anthologies (which were aimed more at adolescents, but which I still love to this day!), plus dozens of other one-off anthologies, which I borrowed from the library on a pretty regular basis. I’ve said it before, but it’s worth repeating: I *love* short stories, I think they’re the lifeblood of the genre, and ever since I became a professional writer, over quarter of a century ago, I have harboured an ambition to edit not only an anthology of my own, but an annual anthology of non-themed horror and/or ghost stories. It nearly happened a few years ago with PS, but then Steve Jones’s A Book of Horrors came along, and Pete Crowther decided that the only way PS could compete was to go in a different direction — to have a different theme for each year, or a different editor per book, or to call the anthology Young Blood and have only stories from previously non-published writers. As Pete’s vision deviated from my own I decided to put the project back on ice for a while. For me it was always going to be an annual non-themed horror anthology, with me as the editor, or nothing.

2. How did you find the process of soliciting, reading and selecting stories for this first volume?

Volume one is invitation only, so I made a list of all the writers whose short fiction I particularly loved, and sent out a mass email. I knew some writers wouldn’t respond, and some would be too busy; I knew also that I wanted plenty of stories to choose from, so that I could select the very bestâ¦ and so I decided to contact around sixty writers in the hope of getting fifteen to twenty really exceptional stories. In the end that worked out really well. I’m delighted with the response, and particularly delighted not only with the line-up I ended up with for volume one, but with the quality of the stories that that line-up produced. The hardest thing was saying no to people, particularly as a lot of the writers I contacted for the anthology are friends of mine. Of the stories I was sent that didn’t make it into the anthology, some were rejected, either because they didn’t quite click with me or because they were similar in theme to a story I’d already accepted, and some were held over for volume two. I have to say — with some relief — that everyone I’ve dealt with has been extremely professional; even those writers who I reluctantly had to say no to were fine about itâ¦ or seemed to be, at any rate.

3. What drew you to the stories that made the final cut?

Wow! So many things! The horror genre has such wide parameters, and so first of all, I wanted a real variety of stories — which I’ve definitely got. But within the individual stories themselves, I was looking for originality of ideas, good writing, a strong sense of character and placeâ¦ and really, overall, just a sense of being grabbed by a story, of becoming wholly lost, wholly involved, and wanting to know how the story was going to turn out without being able to predict the outcome.Â

4. In your heart of hearts do you prefer your horror to be of the slashy variety

or of a more subtle psychological stripe?

In my heart of hearts, I definitely favour the more subtle, psychological stuff — in general, I find that far more disturbing. But I love variety! I read a variety of books and I watch a variety of movies, and I would hate to read or watch the same kind of thing again and again.Â