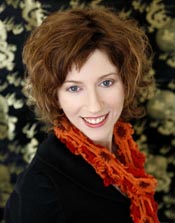 Voted by her peers as girl most likely to be the first female doctor – or a meerkat impersonator – Alison Goodman is also, as luck would have it, an extraordinarily talented writer. She taught me one of the most valuable writing techniques ever, that of reverse engineering for writers. Singing The Dogstar Blues, her first novel, won the Aurealis Award for Best Young Adult Novel and was not only a C.B.C..A. Notable Book, but also an A.L.A. Best Young Adult book of 2004.

Her duopoly that began as Two Pearls of Wisdom has morphed into Eon and Eona. The 2008 Aurealis Award for Best Fantasy Novel was taken out by Eon (in a non-Mafia whacking kind of way), and was listed as a 2010 American Library Association Best Young Adult Book, a James Tiptree Jr. Award Honour Book and a C.B.C.A Notable Book.

She’s working on a new series. She also has great hair. Clearly she is another over-achiever.

1. You get to be whoever you want for a day and go anywhere and anywhen – where do you go, what do you do, who are you and who is your companion?
Iâd be the first female Doctor Who, with Captain Jack Harkness as my companion (heh heh) and we would be off to the future living a long life of lovely debauchery in between nobly saving various worlds and their inhabitants.

3. Your top five books are …
… eclectic and ever changing. At the moment they are: The Crying of Lot 49 by Thomas Pynchon, Cross Stitch by Diana Gabaldon, The Crystal Singer by Anne McCaffrey, The Straw Men by Michael Marshall, and Tree of Pearls by Louisa Young.

4. The sentence I most regret writing is …
… I am delighted to accept your offer of employment as front desk receptionist. (Alas, the delight of both parties wore off quicklyâ¦)

5. Donuts or danishes?
Both: Danish for breakfast, donuts for lunch. And short-crust apple pie for dinner.

Her site, it is here, where you can also see a trailer for the wonderful new book Eona.

This entry was posted in Drive-by Interviews, News, On Writing: General, On Writing: Short Stories, On Writing: The Novel and tagged Alison Goodman, Eon, Eona, singing the dogstar blues, two pearls of wisdom. Bookmark the permalink.