Last night’s phone call from Pete, saying I had a Ditmar made my spidey senses tingle with wrongness and I thought ‘wind-up’.

In the end not quite, but rather drunken confusion from others that ‘nominated’ meant ‘won’. (Not Pete’s fault – he did indeed win a well-deserved Ditmar for Horn). So much laughter and derision this morn – and Cat Sparks took home the Ditmar in question. I believe she has one last space in her Wollongong pyramid made of her many Aurealis and Ditmar awards. As so she should have such a pyramid, for she is awesome.

What I do haveÂ is the below – Cory Doctorow makes origami cranes whilst on panels (Lezli Robyn and I were on a panel with him and snarkled paper cranes afterwards), and Cat Valente did a reading and gave away copies of the Deathless manuscript to anyone who could answer a Russian history question. Huzzah for my teenage obsession with Russian history, which meant that buried deep in my brain was the knowledge that the Russian Revolution started in 1917. And Cat was kind enough to sign it for me.

AussieCon is awesome, but I am exhausted, and back in the room hiding, soon to take a nanna-nap. The books are selling well and I’m signing heaps and trying not to spell things incorrectly. 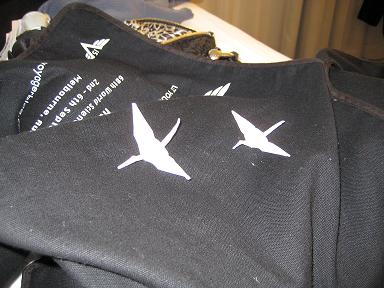 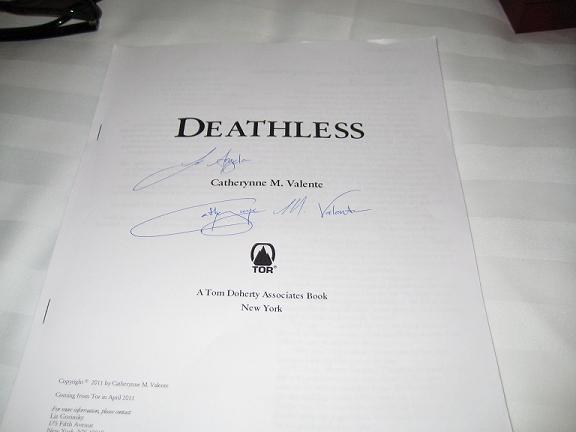