And Then interviews: Maria Lewis

Today, author Maria Lewis chats about her And Then project. 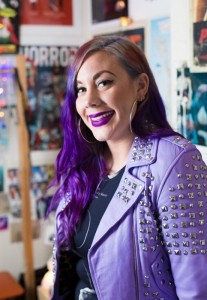 “The Bushwalker Butcher” was inspired by a trip I took up to the Blue Mountains to interview a real-life Yowie hunter (a Yowie is Australiaâs version of Big Foot). I wanted to do a grown-up riff on Scooby Doo, complete with the âyou damn meddling kids!â angle, but itâs obviously a lot darker given the serial killer and body count.

Generally speaking, I like to write what I like to read and an adventure anthology was so up my alley itâs down my street. Specifically though, I wanted to create a mystery tale that centred around two female leads who worked in a newsroom together. Having started as a police reporter and grown up in a newsroom for over a decade, I wanted to capture that camaraderie and special bond that develops between colleagues in a high-pressure environment like that. Crime-fighting lady best friends are also my jam.

Itâs a great way to taste-test characters and a world with an audience, gauge their reaction and decide whether thereâs the potential to expand it in further works. Some of my favourite fictional heroes started in long-short form tales as itâs a great bite-sized version of the wider themes you want to examine.

The future of short fiction is â¦

Multi-media: embracing the plethora of ways there are to tell stories.

I have another anthology coming out on December 14 with Harper Collins – Hot Stuff: Surfer Love – where I wrote a story about an all-girl surfing gang. My main thing though is my debut novel Whoâs Afraid? which is released in Australia inÂ JanuaryÂ through Hachette and worldwide in JulyÂ with Little Brown Books. The sequel is set for release in 2017.

Maria Lewis is an author and journalist based in Sydney, Australia. Getting her start in a newsroom covering police rounds as a teenager, she soon moved into writing about entertainment with her work featured in The Daily Mail, Empire Magazine, Huffington Post, The Daily and Sunday Telegraph, Penthouse, New York Post, Daily Life, Junkee, News.com.au and many more. She has appeared as a pop culture commentator on SBS, ABC and Nine. The co-host and producer of the Eff Yeah Film & Feminism podcast, she also contributed a story to Harper Collins Hot Stuff: Surfing Love anthology. Her debut novel Whoâs Afraid? is released in Australia in January through Hachette and worldwide in July with Little Brown Books. The sequel is expected in 2017.

This entry was posted in News and tagged And Then, Clan Destine, Maria Lewis, Scooby Doo. Bookmark the permalink.