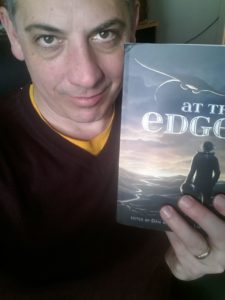 David Versace (Twitter @_Lexifab) lives with his family in Canberra. He occupies his time between meetings of the Canberra Speculative Fiction Guild with minor acts of public service. His work appears in the CSFG anthology Next and in the forthcoming The Lane of Unusual Traders from Tiny Owl Press. Today he talks about his story in At the Edge.

Â 1. What inspired your story “Seven Excerpts from Season One”?

“Seven Excepts from Season One” was initially inspired by a very late-night brush with one of those American ‘reality’ cable TV shows where over-caffeinated college bros hunt ghosts with night-vision cameras. I don’t know which one. There’s probably about twelve of them. The question I asked myself was “Well, what would that look like if there were really ghosts for them to find?” (instead of mildly surprising noises, ignorance of basic camera techniques and worrying indications of cardiac arrhythmia).

I haven’t been a teenager forâ¦um, a while now, but investigating ghosts and reporting about them to YouTube is exactly the sort of thing my high school friends and I would have done to amuse ourselves under different circumstances.

Â 2. What appealed to you about this project?

This is the part where I shamefacedly admit that before this project I knew almost nothing about the New Zealand speculative scene (and I’m still a rank novice). I had read some of Dan Rabarts’ work and knew of him through his work on the Fan Fund for Australia and New Zealand (FFANZ) so I was pretty confident the project was in safe hands.

I have since learned that Lee Murray is, of course, both a delight to work with and a terrifying force of nature.

But the main appeal was the chance to experience speculative themes through a different lens to the Australian one I’m used to. Kiwis and Aussies can tend to look a bit similar from a distance, if you’re squinting and the sun is behind them, but I was excited to see where the subtle differences in perspective lie.

That’s a hard one to answer. I consume so much short fiction that it’s less about emotional attachment than an embarrassing but mostly manageable addiction. Partly it’s the sheer invention of them, especially in the speculative realms, where the author has to set up not only the characters and situations but often invent whole new places, cultural behaviours, technology, ecosystems etc all while telling a complete story.

I think as a reader I respond to the craft of it; the discipline of telling just the right amount of story, and the precision of selecting the right words to convey meaning as concisely as possible. I’m also an unabashed sucker for a well-executed final-page twist, probably as a result of exposure to Roald Dahl’s work at far too young and impressionable an age.

As a writer of short stories, mind you, all that stuff is excruciating work at times. Depending on whether I’m reading or writing, it can be a bit of a love-hate relationship!

Oh, yes. It was almost certainly the couple of Doctor Who novelisations I got for my eighth birthday, penned by the inestimable Terrance Dicks. He wrote with such spare, breathless elegance that he fooled probably multiple generations of kids into thinking writing stories is easy. So I started writing stories. I’m not sure at what point I branched out from terrible Who fanfic (*coughnevercough*)

By the time I figured out that writing’s a disease you can never shake, it was too late for me.

I doubt I’m the only writer around with a shame pile of unfinished projects stacked untidily in an office corner. Once I’ve completed a couple of upcoming short story commitments, I have a first draft of a novel to edit and two sequels to outline.

Somewhere along the way I need to refine my writing process so I can marry more effective and productive work habits to my magpie attraction to shiny new projects.