View from the Intercontinental

I’ve returned from a wonderful weekend in Sydney. Having lived there for four years at one point it was a bit weird to find that this time I felt like a foreigner there. Don’t know why – I guess I’ve just been back in Brisneyland for so long now! It was, of course, a chance to catch up with the Brain, Lisa L. Hannett, and my dear friend Kelly, who I’ve not seen in five whole years – lovely lunch at The Lane in the city.

The visit had a two-fold purpose: On Friday night, Kate Forsyth’s book launch for The Wild Girl went off at Le Kiosk. It was fascinating to hear Kate talk about the inspiration for the book and her journey through some very detailed research. And Lisa and I had an interesting taxi adventure getting out to Shelly Beach from the city, but we shall not speak of it again. And we also got to catch up with Kirstyn McDermott and Jason Nahrung, Russell Farr, Ben Chandler and make the acquaintance of the lovely Zoe Walton from Random House.

On the Saturday morning we headed out to the NSW Writers’ Centre at Callan Park (MAZE!) for the Speculative Fiction Festival organised by Kate and the lovely Rose Powell from NSWWC. It’s a delightful spot out there with all the old buildings, and with tables set up under the trees and the weather pretty darned pleasant it was a great way to pass the day.

We started out with the International Speculative Fiction panel featuring Juliet Marillier and Ian Irvine chatting to Dirk Strasser about their careers and how they became international best-sellers. Next came the Future of Publishing, with Russell Farr, Joel Naum of Momentum, Zoe Walton and writer Dionne Lister, discussing the possibilities for writers to use new and old technologies to get published.

Next, the Allure of Epic Fantasy and Gothic Tales for Teens ran at the same time. At lunch, several of us took up a table under a tree and the group kept growing … this was the original size … it kept growing! Noisy table!! But great fun to catch up with Cat Sparks, Rob Hood, Al Baxter, Thoraiya Dyer, Jenny Breukelaar, Joanne Anderton, Liz Gryzb, Angie Rega, Xena Shapter, and Susan Wardle.

*takes deep breath* AND to see Sharon Johnston there, as well as Robyne Young, Meredith Jaffe of The Hoopla, Rick Keuning, the lovely Fiona and Rivka (whose last names I cannot remember – sorry!).

If I missed anyone, I’m sorry! Also, I seemed to be carrying on at least four conversations at any one time.

After lunch there was Oh the Horror, a fantastic and thoughtful discussion by Deb 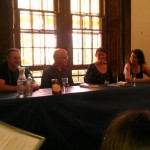 Biancotti, Rob Hood, Jason Nahrung and Kirstyn McDermott about the future of the Weird; while the panel on Writing Spec Fic for Children was conducted simultaneously in the next room. My panel was in the afternoon, chaired by the Most Able Cat Sparks, with myself, Lisa Hannett and Dirk Strasser yapping on about writing and publishing short fiction, while in the room next door there was a discussion about retelling fairy tales. 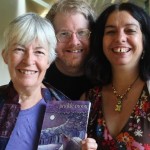 But that was okay, because at the airport I saw this.

And next month, there is Conflux in Canberra.