The Tallow-Wife: A new tale 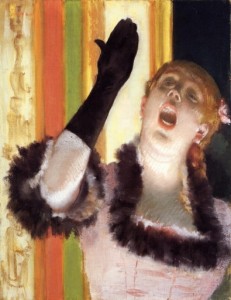 I’m working on a new Tallow-Wife story, this one is called “The Nightingale and the Rose: A Call and Response“.

The girlâs voice is divine; it rises higher and higher as if trying to reach the heavens, which might have been appropriate in a less profane setting. One by one the specially blown glasses vibrate and shatter much to the delight of patrons – although the shards do not spread too far nor wide, and the things have been carefully calibrated and enchanted to ensure no one is cut by their disintegration. It is the party trick, the house special at the Chaucer Theatre in Seaton St Mary, and lovers of music and lovers of destruction flock in equal measure to hear Victoria Parsifal sing.

Oh, the girl could and had lifted her voice higher; the first time sheâd done it every single piece of glass, from tumbler to window pane, from mirror to vase, had exploded. Fortuitously, it hadnât been in the evening when customers filled every inch of the floor, from velvet-covered wall to velvet-covered wall. It was the day, the very first day the girl had been delivered by the rough and capable hands of Madame Arkady (proprietress of Madame Arkadyâs House of Curiosities in Lodellan, and silent partner in this more respectable, more well-known theatre). Go on, the fat woman had demanded as she paraded the prize before Adonijah Hart, sing. And Victoria had obliged, oh how she had done so.

When Master Hart had finished dusting shining fragments from his shoulders, hair and beard – when heâd finished discussing whether it would be cheaper to simply get rid of the girl, and the Madame had assured him the girl must not be harmed – it was decided that Victoria should be encouraged to be careful. That they would make enquiries with the cityâs Glassmith Guild about making the kind of items required to ensure she was a showpiece, not a liability.

They ordered in bulk, but the girl had pulled in so many punters that sheâd paid for herself and the glassware a hundred times over.

This entry was posted in fairy tales, News, On Writing: General and tagged The Nightingale and the Rose: A Call and Response, the tallow-wife and other tales. Bookmark the permalink.